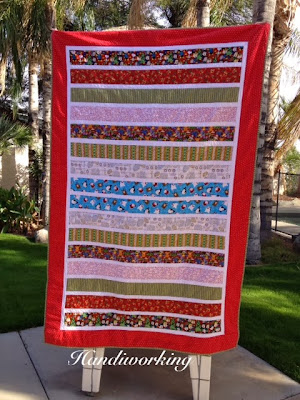 Good grief, Charlie Brown, it's been nearly a month since I last posted anything ... or graced the door of my crafting studio except to finish Ashley's Christmas quilt and sew a button on a pair of shorts. Since then, I've started a new job which is extremely fun, retail with fluctuating hours and days, a lot to learn and, not complaining, but somewhat exhausting. That first week, I was sure my head was going to explode and my feet were going to fall off, but I'm cruising now and it's a good thing since we are moments away from holiday shopping.

Ashley's quilt, which we've named the Palindrome Quilt because it reads the same from top to bottom and vice versa, is a super easy project, great for beginning quilters and to feature your favorite fabric prints. We spent a few hours at Joann's where she painstakingly selected 8 prints. The peppermint stripe in the third panel we also used for the striped binding. In the ninth panel, the snowflake print was used for the entire quilt back and the red and white polka dot was used for the border. 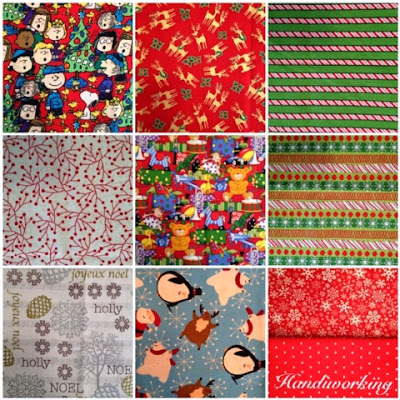 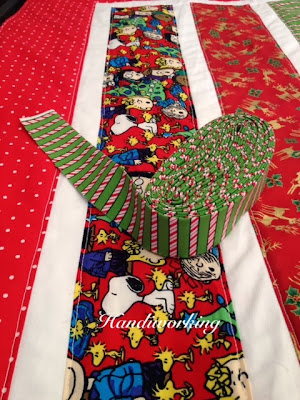 She had a very clear idea of how she wanted this quilt pieced, which was width of fabric strips with white sashing in between to feature the prints. She wanted them to go in a specific order to the center and then back again so Charlie Brown was on each end. We had 1/4 yard cuts that I sub-cut into 4" strips. The sashing and inner border has 1-1/2" wide strips. 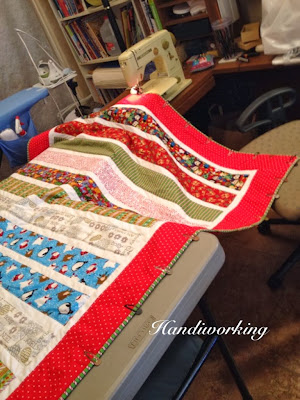 The red polka dot outer border is comprised of 5" wide cuts. I purchased a full yard of this fabric just because it's so pretty and I knew I could easily, happily use it in other projects. I also purchased a yard of the peppermint stripe binding giving me 1/4 yard for the center stripes and 3/4 yard for the binding. 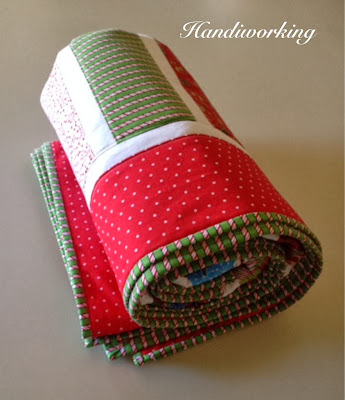 The quilting is simple straight line quilting. Finished size on the quilt is 50" by 76" which is perfect to snuggle under while watching Christmas movies. Washed and crinkled, it's ready to go ... 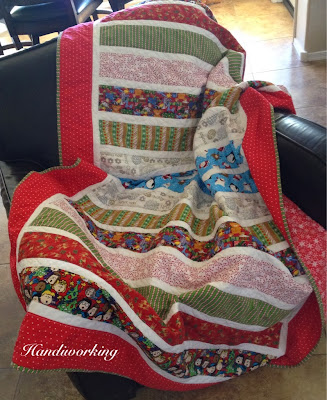 So many projects, never enough time ...
Posted by Handiworking at 6:08 PM No comments: