I took sewing classes in junior high school -- that's what they called it back in the olden days. Now I get corrected because it's middle school, geez. We had Bachelor Arts classes with sewing and cooking lessons. There were separate cooking classes for the boys and girls but once they tested us against each other to see who knew the names of more kitchen tools. The teacher held up a pair of tongs and one of the boys quickly shouted, "Wienie grabbers!" Shocked silence because, [[[you know, he said wienie]]]! Then we all died laughing.

I was so disappointed that those classes were no longer available when our daughters went to school, but I guess they're back now. Our granddaughter's high school offers Fashion for sewing and design, Culinary Arts for cooking, even forensics, theater production and photography. Makes me wish I could go back to school ... I love taking classes.

The last time we went to an evening event at the school, the culinary students were handing out burritos that they'd made that day. The granddaughter said you can always tell when they've been cooking because the smoke alarms go off and they evacuate. Well, I guess some things never change. 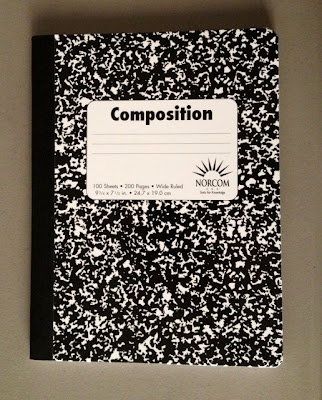 Seems like these black and white composition notebooks are a part of growing up. I had them, my friends had them; in fact, my husband still uses them for work and has many filled up with important notes.

I purchased and downloaded a very cool pattern recently from Martingale, the Novella Composition-Book Cover by Cassie Barden. I'm always on the lookout for gift ideas and uses for some of the fabric stash I've managed to accumulate. 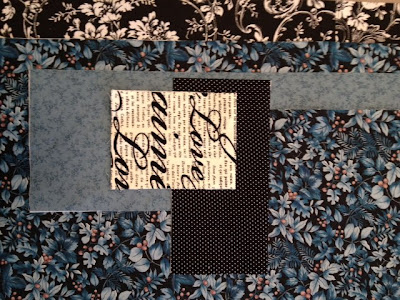 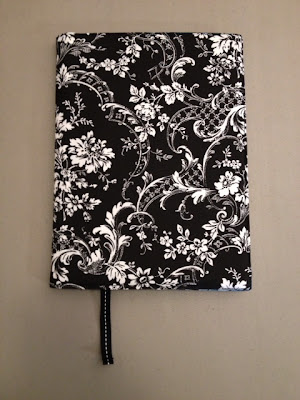 Love it so much with all of the great features it sports. It's fully lined, has pockets for notes, pens and business-ID-credit cards, and even a ribbon page marker. 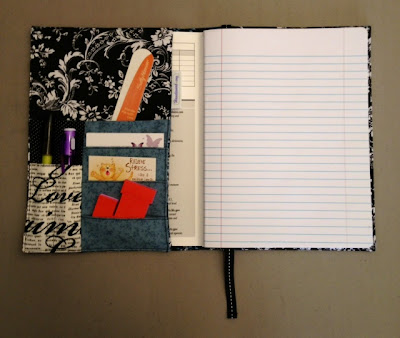 Wouldn't this make a wonderful teacher gift or something special for your kids or their friends? You could even personalize it with their name or initials embroidered or appliquéd on the front or inside cover.

The pattern is a PDF download, has wonderful instructions and photos, and is fairly simple to make. Thanks for creating this great pattern, Cassie Barden!

So many projects, never enough time ...
Posted by Handiworking at 4:37 PM No comments:

Have you ever been in love with an appliance? No, not Sex in the City style, more like Sew in the City. I'm still learning all the ways that my new serger makes life easier and just plain loving it!

I've wanted to try sewing with knits and I can always use a few new comfy sleeveless tops with summer approaching in Phoenix. Picked out this pattern (Simplicity New Look A6150) and fabric (a nice knit from Hobby Lobby that ended up costing around $8 for 2 yards after a 40% off coupon) and gingerly tip-toed my way through making view C. 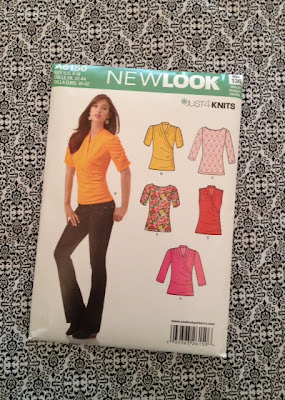 I wasn't sure about how much negative ease I'd need and it appeared from the measurements listed that there was 2" built into the pattern. A few years ago when I attempted sewing myself a cotton blouse, I wasn't aware of "ease" and how it worked, and ended up with a circus tent due to about 6" of positive ease. So I made this shirt one size smaller than I thought I should which did turn out to be a mistake. Knits can be so comfortable and easy to wear ... unless, of course, they're too snug in which case the potential danger is accentuating [[[back fat]]]. Note: Triple brackets denote whispering because nobody needs to see it or hear about it!

But I really like this pattern and learned a few things about working with knits. The curling edges are not alleviated by cussing but steaming-pressing-starching does help. And the serger was absolutely amazing, slicing, dicing and making beeeeyooootiful seams in half a second.

The blouse has pretty gathered shoulder seams that are held in place and kept from stretching during wear by utilizing hem tape (I used black) sewn over the gathers. This was a new trick for me and it's simple and great. 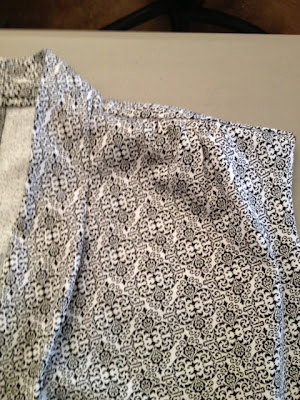 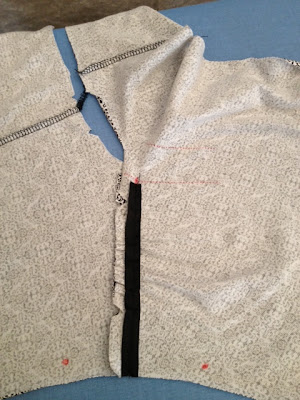 The front of the top has a criss-crossed double layer of fabric, with one side gathered along the seam. The pattern instructions say to layer all these pieces together right side out, baste, then turn inside out and serge the seams. Unfortunately, mine has a few areas of the inner seams that apparently bulged back through and show on the outside. Way too complicated to take apart and redo so I clipped the error as closely as I could, which is okay this time. Knits do not unravel and it doesn't show because the busy print on the fabric hides it.

So I finally reached the point of trying it on and *sigh* it's a little too snug for my:
a. comfort
b. personal style
c. age
d. all of the above 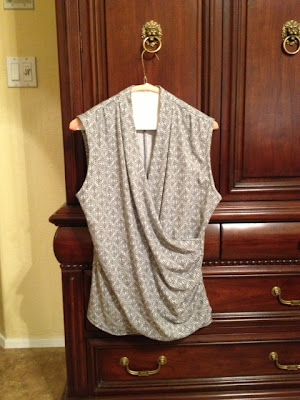 But I like this pattern a lot and wanted to remake it again quickly while I remembered what I was doing. Back to the store for another purchase of plain gray knit this time. It was much faster and easier the second time. I changed the way the side seams were assembled, just carefully layering and pinning it inside out without basting first this time. Much better!

I do plan to make this top again and want to try the other plain t-shirt included in the pattern. I like sewing with knits and the serger is an incredible tool!

The biggest compliment of all? When I showed my 16-year-old granddaughter the black-and-white print blouse, she said, "You made that? Looks like it came from a store." Yeah, baby! 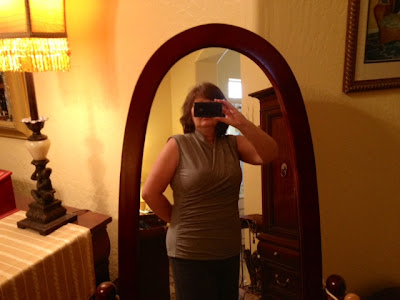 So many projects, never enough time ...

Posted by Handiworking at 7:05 PM No comments: